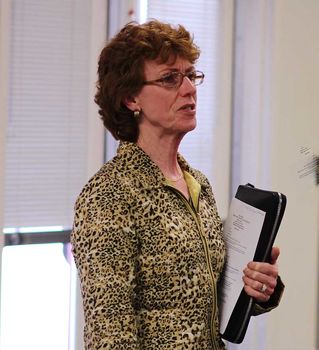 Two informational presentations were given to the Borrego Springs Community Sponsor Group on May 7. The first was a briefing on the microgrid from representatives of SDG&E. The microgrid is a subset of the larger electrical grid, which can be disconnected to operate independently and then reconnected to the grid. With a previous grant of $8 Million from the U.S. Department of Energy and about $2.8 Million from the California Energy Commission, SDG&E has been attempting to integrate and leverage distributed generation storage onto the electrical grid to reduce the peak load.

The microgrid in Borrego Springs was the first large-scale microgrid project. "There's a lot of interest, not only across the country but around the world, about this project and what we're doing," SDG&E's smart grid project manager said. In fact, dozens of groups have come to Borrego to tour the microgrid, including a group from China earlier this year,and about forty people from the Solar Energy Power Association just last week. SDG&E says this new technology has set the foundation for even greater improvements in the future. They have installed three community energy storage boxes around town for the purpose of Solar smoothing (to maintain a steady state on the system.) Each box serves between 1-5 homes that use Solar panels. The California Energy Commission recently awarded SDG&E a nearly $5 Million grant to expand the Borrego Springs microgrid so it can use the 26 megawatt industrial Solar facility in Borrego. The expansion is expected to be completed by mid-2016.

Beth Hart, President of the Board for the Borrego Water District next presented information about new prohibitions in the Governor's Emergency Order affecting all municipal water districts in the state. A final Order will be in effect as early as May 15. The Emergency Order applies to Borrego in this manner: Either we limit irrigation to two days a week or reduce our municipal use by 25%. "Clearly we are not willing to devastate our valley by destroying all the vegetation here, so our option is to reduce water usage by 25%," Hart said. "We don't have a clear answer concerning what the penalty will be if we fail to meet the reduction." 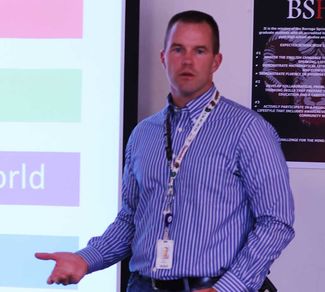 Water agencies statewide have reacted to the Order with Drought rates and restrictions, policies and penalties to enforce compliance. "In Borrego, we have considered these various ideas and decided we would prefer to take a different path. We want to do something constructive for Borrego." Hart then urged everyone to attend the BWD's next two meetings on May 19 and May 27 when they will discuss positive ways to achieve this with the public. "Here's the bottom line – We don't want to be derailed from our goal to move forward as a community to build a plan under the Sustainable Groundwater Management Act to address the overdraft. That's our priority. Droughts come and go, but the overdraft remains." The BWD admits the cost to provide water to ratepayers is bound to increase, "but if we work together, pool our resources and think through our objective, we can plan a controlled process so that Drought orders and other state mandates don't divert our resources and create a crisis for our community."