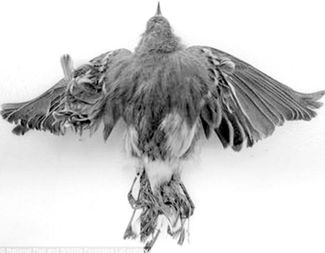 The Ivanpah Solar project, in San Bernardino County, just southwest of the Nevada border, and off Interstate 15, is the world's largest concentrated Solar project. The U.S. Fish and Wildlife Service has called it a 'mega-trap' for birds and insects.

A new report now states that 3504 birds died there during the project's first year of operation.

Bird deaths were known at the, 'power tower' project, but how many was unclear. It has been a subject of fiery debate. James Meier, writer for the Desert Sun, says those concerns have generated strong opposition to a new tower project proposed for the Riverside East Solar Zone east of the Coachella Valley. This Palen project, visible from part of Joshua Tree National Park, would be built on the Pacific Flyway, a major migratory bird route.

Carlsbad based NRG Energy operates Ivanpah. It uses thousands of mirrors that direct sunlight at boilers on top of three 459 foot tall towers, heating a liquid used to create steam used to run a turbine. NRG Senior Director, David Knox, says, "Our focus is reducing our environmental impact as much as possible." He points out a few measures being considered, including sonic and smell deterrence, mirror repositioning, LED lights, and turning off lights at night.